Angi analyzed data from Zonda Media's Remodeling 2022 Cost vs. Value Report to look for some of the best values in home remodeling. 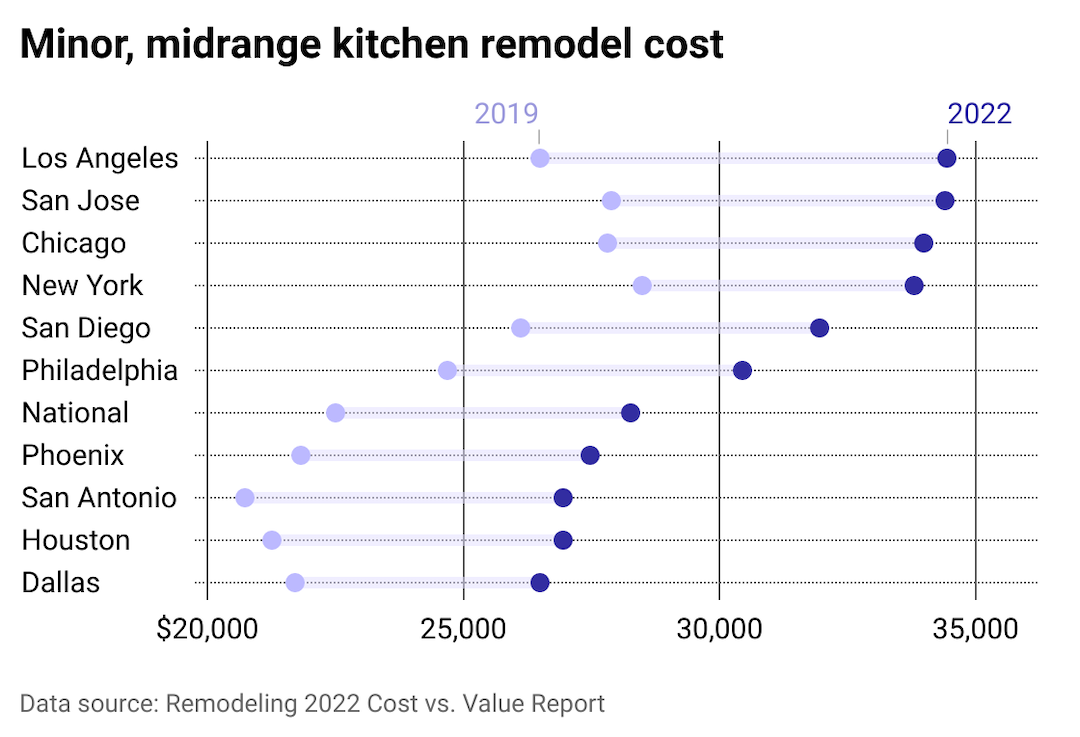 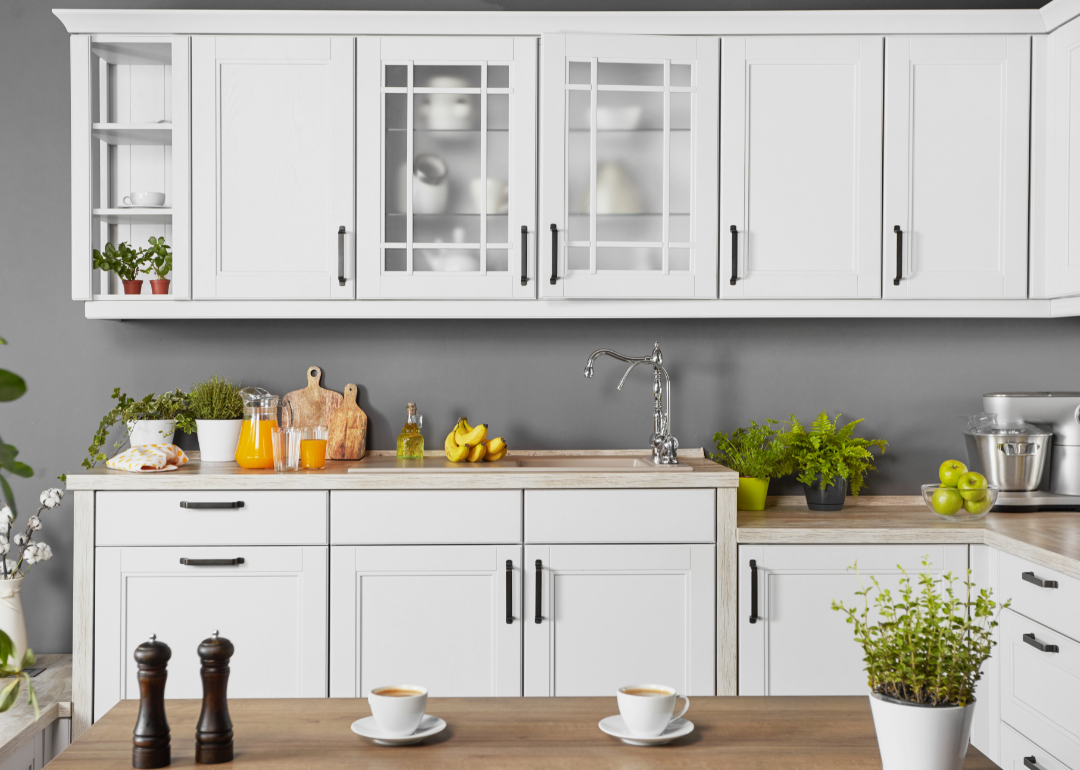 That kitchen remodeling you've been saving for? It may not add as much value to your home today as it would have three years ago. That's because, generally, returns on investment in home improvement projects are lower now than pre-pandemic. But there are still several upgrades—including a kitchen remodel—that can help homeowners recoup a majority of their investment.

Angi analyzed data from Zonda Media's Remodeling 2022 Cost vs. Value Report to find the three projects that saw the highest percentage of their costs recouped. The analysis compares cost and return on investment for those projects in 2019 and 2022 to see the status before COVID-19 and in its wake, honing in on the 10 largest cities in the U.S. For 2022, the three projects with the highest cost recouped are garage door replacements, manufactured stone veneer, and minor, midrange kitchen remodels.

Overall, home renovation costs have been steadily increasing overall the past two years, as global supply chains were thrown into disarray by pandemic-era regulations and public health precautions.

Labor has also become an increasingly expensive part of construction and home renovation work due to a national shortage of skilled workers in building trades. Employers face pressure to increase wages in order to attract the needed workers, resulting in a larger bill at the end of the day for consumers. The U.S. is projected to have a shortage of 650,000 construction workers over the remainder of 2022, according to a February 2022 report from Associated Builders and Contractors.

But rising costs haven't stopped Americans from upgrading their homes. Home remodeling activity in the U.S. has been heating up since the end of 2020 and is just now starting to moderate, according to Harvard University's Joint Center for Housing Studies.

One thing to keep in mind if you are planning a new project: Demand for building materials has grown over the past year. And as a result, manufacturers are increasing materials prices. Prices have gone up 10% to 15% this year and many parts of the country are experiencing long delivery times, according to an Angi industry analysis. If you're planning a building project, start as early as possible in the season, prepare for potential price fluctuations, and allow extra time to order materials. 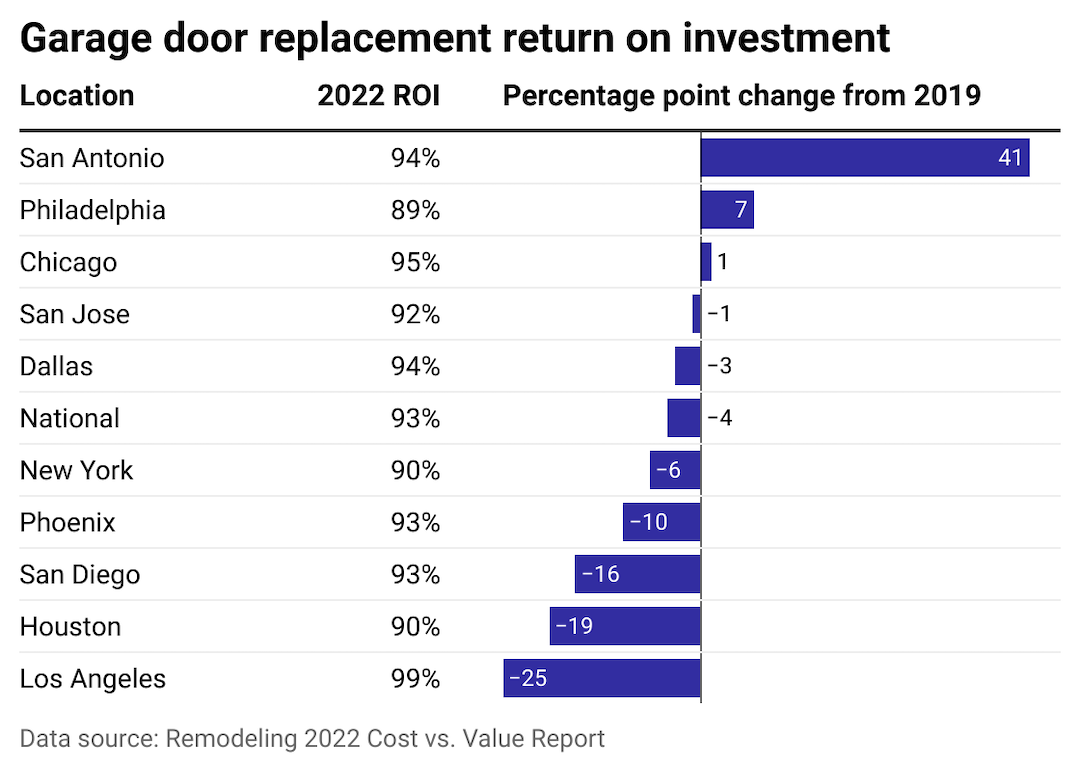 Garage doors are a home component that even major home builders are having a hard time reliably obtaining. Yes, construction material prices skyrocketed, workers are tough to find, and other supply chain bottlenecks have plagued homebuilders this past year. But garage doors, specifically, emerged in 2022 as the number one sourcing challenge for builders, according to John Burns Real Estate Consulting.

Experts point to disruptions, including hurricanes and winter 2021's Texas Freeze, that have stifled plastic production at oil refineries along the U.S. Gulf Coast. Hurricane season this year could set off another slew of supply chain disruptions globally. Steel is also in limited stock due to supply chain troubles and a persistent backlog generated from high demand in recent years, according to the World Steel Association. 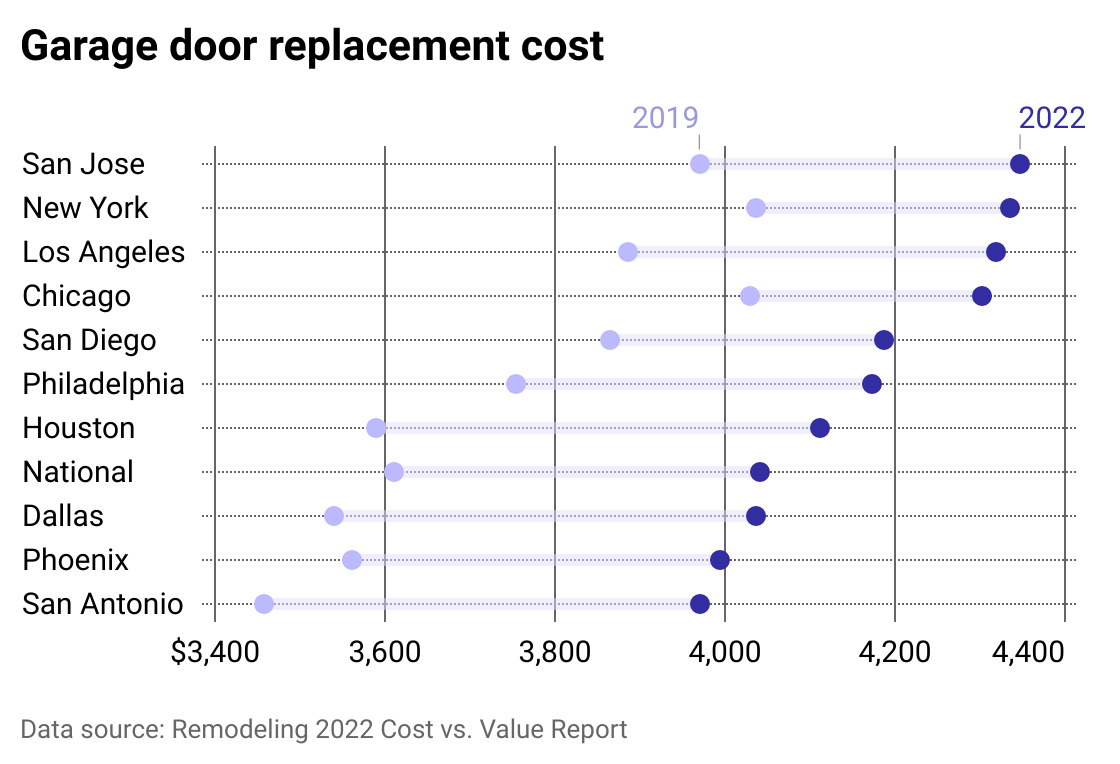 A new garage door costs around $4,041 on average in 2022—12% (or $430) more expensive on average than in 2019. Still, it's one of the more affordable renovation projects homeowners can undertake. In major Texas cities, the cost of a garage door has risen faster than the national average. 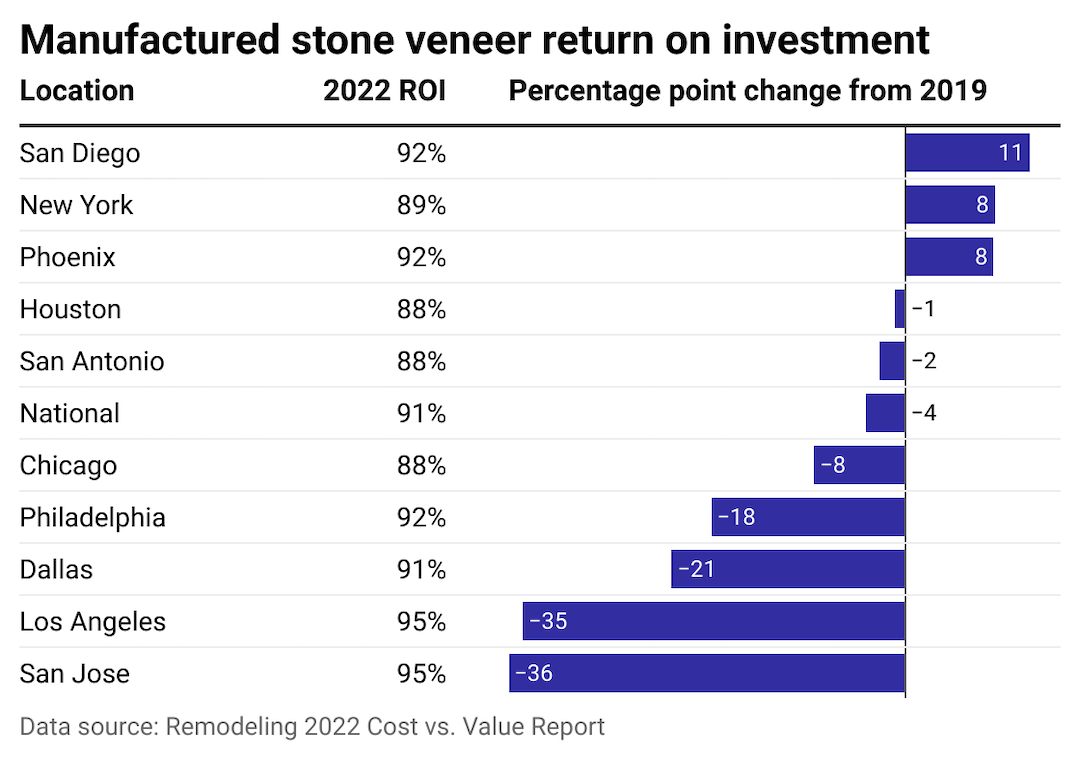 The return on investment for this project increased from its pre-pandemic payoff in Phoenix, San Diego, and New York. Where stone siding would have boosted home values pre-pandemic in Los Angeles, San Jose, Philadelphia, and Dallas, homeowners in those cities will have to settle for recouping the majority of money spent on it today.

Manufactured stone veneer costs are up, but remain on the lower end 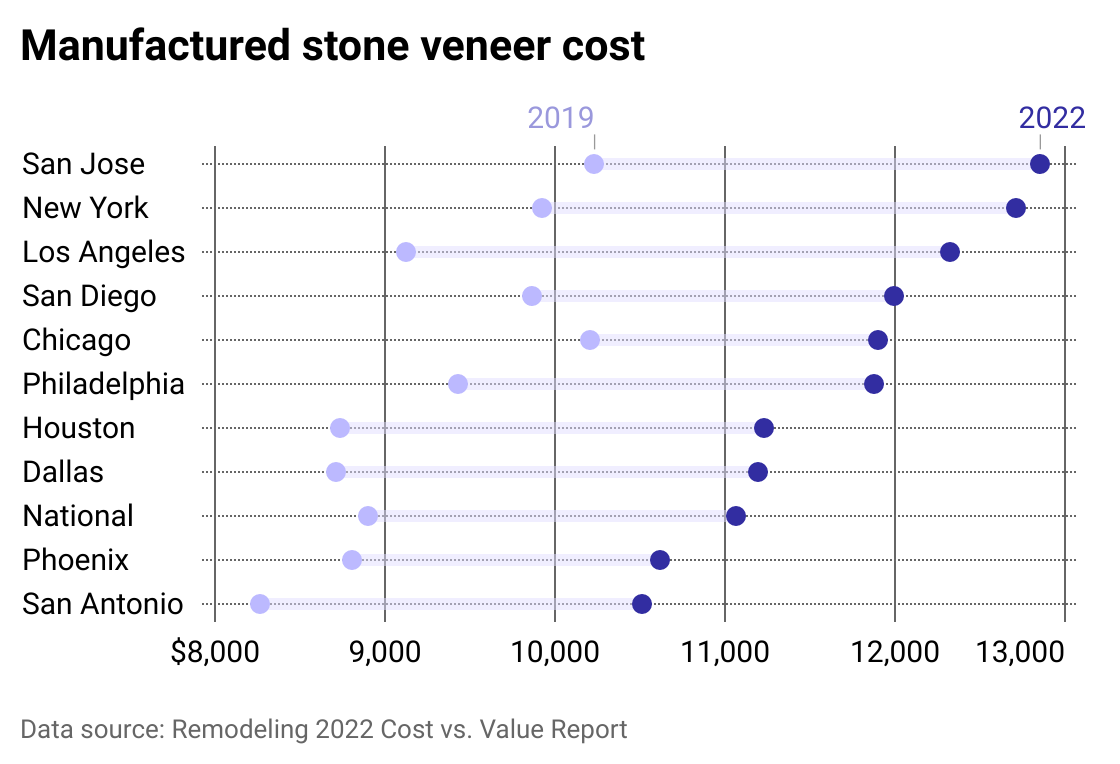 Upgrading the siding on your home to include a stone veneer accent provides the second-best return on your investment after replacing the garage door. These projects have increased across the country by 24%, on average, since 2019. The average stone veneer siding renovation job will set a homeowner back $11,066 in 2022. 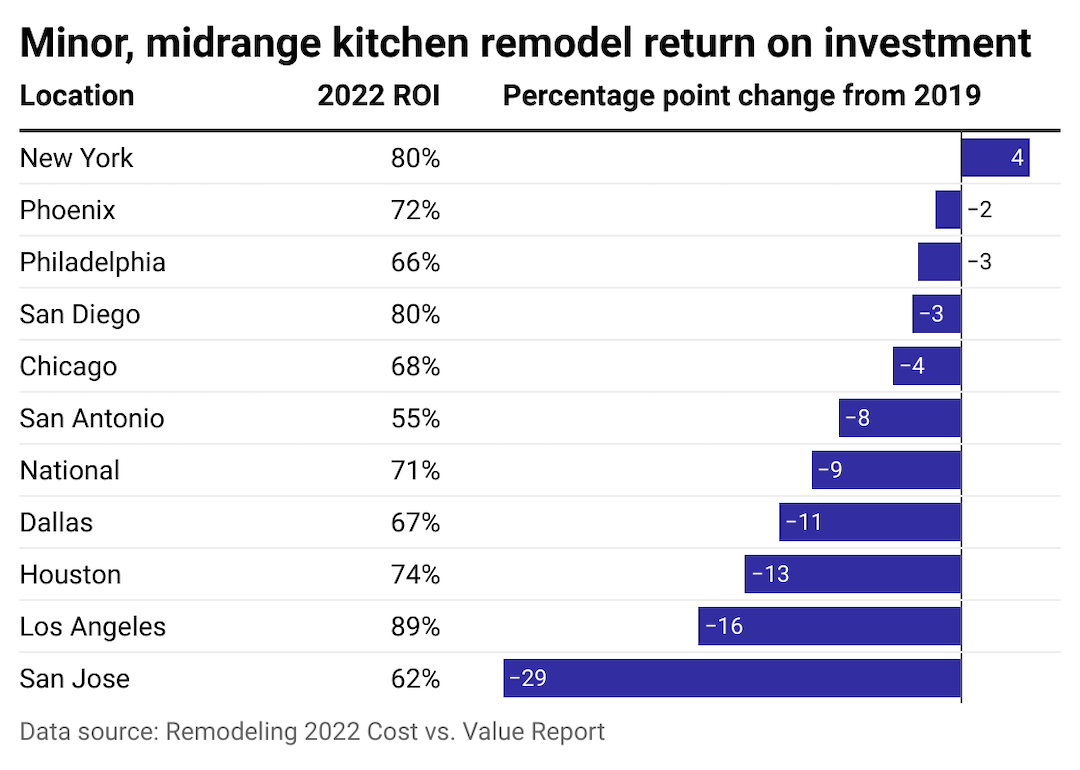 A major, upscale kitchen remodeling project will only see half of its costs recouped in 2022—but a smaller project will return closer to 70% of your investment when you sell the house. A minor kitchen remodel could include replacing large appliances with energy-efficient models or updating trim and laminate countertops. It does not include a full cabinetry refresh or projects of similar scale.

Minor kitchen remodels are pricier, and costs have increased by the highest margin

The value of making minor updates to a kitchen has been on the decline since 2019, with the difficulties finding large appliances—and their rising costs—pushing return on investment downward. Nationally, the cost of a midrange kitchen remodel is up 26% on average compared to pre-pandemic.

Kitchen appliances are one of many consumer items that have increased in cost and delivery backlogs. Much like with furniture, consumers have seen months-long delivery delays for home appliances over the last two years.

This story originally appeared on Angi and was produced and distributed in partnership with Stacker Studio.

7 ways to increase storage space in your backyard